Hello all! Recently TLA Entertainment (www.tlamovies.com) commissioned us to put together window displays for their two Center City stores - 4th & South (pictured) and 15th & Locust (photos of which will be coming shortly). With the help of Box Brown (www.boxbrown.com), we put together these beauties. The fabric backdrops are original hand painted designs. Elizabeth J. Smith did the Clarice and Hannibal portraits in oil pastel (http://www.sennelier.fr/) while Box Brown did comic versions of Annie and Woody for the Annie Hall window. Sarah L. Hunt designed the Annie Hall repeat. Please stop by the store to check it out!
Thank you!

I FOUND LOVE on February the 13th 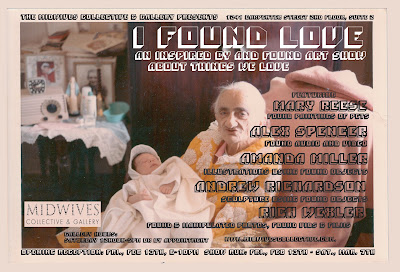 Hello all,
it's been a while, what with the holidays and all. But now we're gearing up for our February show: I Found Love. This show is curated by our friend Rich Wexler and features the works of Andrew Richardson, Mary Reese, Amanda Miller and Alex Spencer:

"I FOUND LOVE"
An art show of found, and inspired by found images of the things we love.

Andrew Richardson spent almost a decade in the wilderness. Now he returns, with evidence of what love for robots, Christmas, and women in general will get you.

MARY REESE
Mary Reese began painting eight years ago while living in Indianapolis and attending Indiana University. She is a recent Philadelphia transplant. Her current oil paintings are portraits, focusing on both animals and people found on the internet, as well as bright colors and texture. Reese enjoys the humor and unnaturalness found in portraiture. She is extremely interested in the relationship between pets and their owners, and how central animals are in the lives of Americans. She also finds it fascinating that personal information and photographs can be obtained on the internet and utilized by anyone. When not painting, Reese works with students at South Philadelphia High School and teaches adult English classes. She is currently attempting to master the ukulele.

ALEX SPENCER - Found video
has collected videos for many years. He will be highlighting some of his favorite finds.

RICH WEXLER -
Has collected "Found" photographs and videos for about ten years. He has been lucky enough to have found, or has been given by friends, approximately 1500 photos, 500 slides, 15 super 8 reels, and 7 yearbooks. Many of these are found in larger collections of a few hundred photographs. In addition to showing various parts of his collection, he has started a blog called "Found in Philadelphia" as a way to try to collect various other people's found pics to create some kind of strange, unknown, narrative of the city. He will also be showing found pictures and videos that have been manipulated and made into something new.

And here's a found video of Rich's:

"Found outside of student housing during Penn Christmas, The camp is Camp Saginaw in the Poconos. On a side note; I actually went to college with Hugh "Space" Asden and he was in my fraternity. On another note, I had screened this at a bar one night and the guy who actually shot the video wound up being there randomly." - Rich Wexler

See you there!
Posted by Elizabeth McTear at Wednesday, January 14, 2009 No comments:

works by Nora Hiriart, "Small" Curator: "Venus" and "From the basement of the museum" works by Nora Hiriart, "Small" Curator: "Venus" and "From the basement of the museum" , originally uploaded by Midwives Collective & Gallery. A photographer friend of mine from the girl scout days, Caitlin Ryan, took a bunch of amazing photographs at the "Small But Unexpected" opening reception on Dec. 5th. The show has been extended to Sunday, Dec. 14th and there are 2 more opportunities to see the show that weekend:

The gallery is open at noon - 10PM, with closing reception starting at 6PM. Live music by MFM (Morose Freak Machine) at 8PM with dance/movement performance by M. D'Agostino. From about noon-5PM there will also be art & craft vendors throughout the building and a Holiday Bazaar in the yoga studio on the 3rd floor of the building. Refreshments will be served.

Last day of "Small But Unexpected", gallery hours from noon to 5PM.

We hope you can come to see the show before it comes down. It's a beautiful collection of small works, many of which would make unique and affordable holiday gifts.

Hi all,
One of our members, Nora Hiriart, has put together a particularly interesting show that's opening this Friday (Nov. 14th) entitled "Small but Unexpected". I personally think this show is uncommonly beautiful and encourage you all to share in it.

Nora has a special perspective that comes from being a transplant from Mexico in our American world. She's never lost that perspective of someone who simultaneously looking from the outside in and the inside out. It is this trait that I believe pushes her to explore the works produced by many cultures and her drive to create a space in which cultures create an understanding. In her show, "Small but Unexpected" the pieces are typically of small scale or have aspects to them that are small, but impact the piece and the viewer in a big way. There is a trading of nuances achieved when viewing the show as a whole: you can see the big picture of pieces or movements within pieces so small.

The works featured are from a myriad of artist; local as well as special participants from Mexico and Japan. The pieces from Japan are on loan from the Keisho Art Association in Japan. While I've not entirely grasped what Keisho is exactly about, I feel so much when I look at the pieces they've shared with us, as I do the works from the other artists in this show.

Hope to see you there!

Please email themwc@gmail.com with questions or to schedule an appointment.